Cinema has always displayed an affinity to characters with a distorted relation to reality, stricken by madness, make-believe and hallucination. Contemporary cinema adds another layer to the canon of film characters: unwitting ordinary victims of deception, for who the skepticist fear that the world is in some sense not real has become true. Truman Burbank of The Truman Show spends his life in a TV studio world as the unknowing star of a life-long daily reality show directed by a megalomaniac filmmaker; the world of The Matrix turns out to be an interactive computer simulation run by sentient computer programs, and in Vanilla Sky the young media magnate David Aames becomes his own evil deceiver by building a lucid, computer-simulated dream world for himself. Fundamental deception even extends to the characters’ self-knowledge and knowledge about others: While Malcolm Crowe in The Sixth Sense remains unaware about the fact that he is already dead, in Moon the astronaut Sam Bell discovers that he is merely a clone of an earlier version of himself, and the fictional film audience of S1mOne believes this virtual, computer-generated actress to be a flesh-and-blood person. 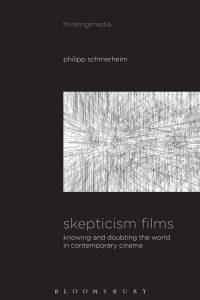 From a philosophical perspective, such films are variations of skepticist scenarios according to which we are not able to “know what we think we know” (Stroud) about the world we live in, about ourselves, or about others. They are what I call „skepticism films“: dramatized, fictional narrative configurations of the thought experiments that are part and parcel of philosophical reflection on knowledge and doubt.

The first part of the book defends a general, pluralistic film-philosophical position according to which films can be, but need not be, expressions of philosophical thought in their own right. The second part investigates the role of skepticist ideas in philosophical reflection on the medium of film by critically discussing the works of the film-philosophers Stanley Cavell, Gilles Deleuze, Josef Früchtl, Patricia Pisters, and D.N. Rodowick. The concluding parts of the book explore varieties of skepticism films as an integral phenomenon of contemporary cinema culture with the help of detailed case studies of films such as The Truman Show, Inception, Matrix, Vanilla Sky, The Thirteenth Floor, and Shutter Island.

Skepticism Films. Knowing and Doubting the World in Contemporary Cinema has been published with Bloomsbury Publishing in November 2015. The link to the publisher’s website is here; an online reading sample can be found here.

“Drawing from both analytically-inspired film philosophy as well as the work of Deleuze, Philipp Schmerheim identifies a distinct trend in contemporary mainstream filmmaking, which he calls ’skepticism films‘ – narrative films that dramatize suspicion and doubt about what we know about the world. This book is a bold and ambitious contribution to current debates within film philosophy.” –  Warren Buckland, Reader in Film Studies, Oxford Brookes University, UK

“Philipp Schmerheim’s book is an important intervention in the growing field of film philosophy. It makes a persuasive case for introducing the tradition of philosophical skepticism into current debates about how the cinema shapes our view of the world and offers cogently executed critical engagements with leading figures such as Stanley Cavell, Gilles Deleuze or D.N. Rodowick. In highly original readings of a number of recent international Blockbusters, Schmerheim’s ambitious study draws our attention to a forceful skepticist undercurrent running at the heart of contemporary popular cinema. Without a doubt, Skepticism Films is a brilliant accomplishment, opening up a whole new way of thinking about film.” –  Michael Wedel, Professor of Media History, Film University Babelsberg KONRAD WOLF, Germany

“Here is an intriguing volume about a small group of mainstream contemporary films that question the very notion of ‚reality,‘ films such as The Truman Show, The Matrix, The Thirteenth Floor, Vanilla Sky, and Inception. A scholar of the philosophy of film, Schmerheim uses a finely focused theoretical lens to unpack the films and the ways in which they leave viewers without solid ground to stand on, upending traditional notions of narrative and conventional cinematic structure. What is perhaps most refreshing about this volume is the author’s scrutiny of films ordinarily dismissed as entertainment, as lacking depth. Schmerheim demonstrates that that is manifestly not the case. Through an intensive application of the work of Stanley Cavell, David Bordwell, Gilles Deleuze, Thomas Elsaesser, and others, the author peels back the layers of these well-known films to reveal alternative thought systems that would not at first occur to even the most sophisticated viewer. A plethora of well-chosen frame grabs illuminates the text. Thoughtful and intriguing, this entry in Bloomsbury’s new “Thinking Media” series will amply repay close attention. Summing Up: Recommended. Graduate students, researchers, faculty, professionals.” –  Gwendolyn Audrey Foster, in: CHOICE, October 2016